Age of Holders is a play-to-earn game developed on the Binance Smart Chain network, and is a strategy and resource management game. If you have played Travian before, you can get familiar with the Age of Holders game more quickly. Age of Holders has adopted quite different strategies to maintain its stable economy since its launch. In order to play the game that has been going on for a long time, we need to have a Metamask wallet.

Age of Holders is basically a strategy game where we recruit soldiers with our resources and fight other players. The characters called ‘Commanders’ in the game, which are necessary to take our soldiers to war, constitute the most basic mechanics of the game. The Commander characters we have determine how many soldiers we can fight and provide our soldiers with special bonuses to form our game strategy. The way to earn money in the game is to fight with other players. Each soldier we buy provides a certain combat power point. AHG token, BNB coin and in-game currency Gold are used for in-game purchases. Gold earned from battles can be converted into AHG tokens and converted into real money. In addition, we can start to note our special phrase: “Build your army”. There are 2 important points to consider in Age of Holders play to earn game: The soldier capacity of our account and the soldier capacity of our Commander characters.

There is only 1 way to increase our soldier capacity in Age of Holders play to earn game: Keeping AHT tokens. Each AHT token provides us with a capacity of 5 soldiers. We start the game with a capacity of 5 soldiers already. As we increase the amount of AHT tokens that can be purchased in-game, our troop capacity, thus the probability of winning battles and our earnings increase. The AHT token can be purchased in-game from the Chests section.

It is not possible to create an army without a Commander and therefore to be able to play the game. The most important feature of Commander characters is their soldier capacity. As its rarity level increases, so does the number of soldiers it can take into battle. Each Commander has a different feature. Some Commanders provide bonus power to Spearmen, while some Commanders provide bonus power to Archers or Knights. We can create a stronger army by paying attention to the feature of our commander. Commanders can be obtained in-game from the Marketplace, starting chests, scraping tickets, or using the ‘Hire Commander’ option in the Castle section.

We can sell the Commanders that we do not use in the marketplace section, destroy them to increase the experience points of other Commanders, or use the Retire option to destroy them for 10 Gold. In addition, the clothes and accessories that our Commanders will equip will give them bonus powers. Another important feature to be aware of is the “Family” feature of Commanders. Each Commander belongs to a “Family” and 2 Commanders from the same Family cannot be used simultaneously in battle or defense at the same time.

Battles are one of the basic mechanics that we earn money in the game. We must have energy to earn money from battles. Energy is regenerated at 1 unit per hour. We can do battles without our energy, but we cannot make money. In order to participate in battles, we need to create an army. Barracks, Stable or University buildings are used to create an army from Swordsman, Spearman, Archer, Knight and Sage type soldiers suitable for the soldier capacity and characteristics of the Commanders we have. We get the Barracks and Stable buildings for free when we start the game, but we have to purchase the University building. In order to buy the University building, we need to upgrade 1 era from the Town Hall building. Upgrading an era adds bonus points to the strength of our soldiers, allows us to use unusable buildings, while the energy regeneration time increases with each era.

When we click on these buildings, a screen appears where we can determine how many soldiers to buy. The price of each soldier is different. It is worth Swordsman 24 Gold, Spearman 21 Gold, Archer 21 Gold, Knight 33 Gold, Sage 24 Gold.

From this section, we can buy the desired amount of soldiers by clicking on the ‘Hire’ section.

Each soldier has different advantages and weaknesses against each other. Swordsman is the most balanced class, while Spearman is effective against the Knight class. Archer is weak against all classes, but can attack from a distance. Knight is the strongest class, but weak against the Spearman class. Sage, on the other hand, is powerless against all classes, they are not warriors, but by supporting the warriors, they make them fight more efficiently. By increasing the level of the soldiers we have, their strength can also be increased. Use the link below to review the strength of the soldiers and the added points when they are leveled up. Whitepaper

The part with the soldier symbols on the commanders shows how many soldiers of which class we have and how many of them are put into the service of the Commanders. The house icon on the far right shows the total troop capacity of our account.

After giving our soldiers to the Commanders in accordance with their classes, our army is ready to fight. We can see our total battle points in the Quest section on the left.

Now everything is ready! War awaits us! We can go to the battlefield by clicking the Attack button in the Quest section. When we click the Attack City button on the screen that comes up, we fight a random opponent that will appear. We are then taken to a screen where we can see the simulation, details and results of the battle. That’s it!

One of the most enjoyable aspects of the war mechanics in Age of Holders is that even if we lose the war, our soldiers do not die, and even if we lose the war, we earn some money. Moreover, it is possible to earn money not only by fighting but also by defending. We need to withdraw the Commanders from the battlefield before we can create defenses. To do this, we have to click on the button under the Commanders. In order to be able to defend, we need to create an army again by clicking the Defense section at the top of the screen, where we put our soldiers at the command of the Commanders.

By defending against the enemies attacking us when we lack energy, we can stop their attacks, so we can have the opportunity to earn money even when we are not playing the game. So when you run out of energy, don’t forget to pull your commanders and soldiers from the battlefield and put them in defense mode! We can also buy the Defense Tower building to increase our defense power. Let’s also complete our special statement: “and be the strongest”.

We can receive the earnings from Battles or Defenses in Gold or AHG coin type. To determine in which currency our earnings will be received, we must tick the option that suits us in our profile.

Arena mode is a mode where we fight with players of a certain rank. Here we try to rise in the rankings by re-forming an army and fighting players of the same rank as us. There is no benefit to being at the top of the rankings at the moment, but an update will come as soon as possible. Another interesting mechanic of the game is clan formations. Clans, which are opened by paying a certain fee, make daily flag wars among each other. They also earn certain amounts of Gold according to the value of the won flag.

The main reason behind the stable economy of Age of Holders play to earn game is ROI, that is, the return limits of your investment. If you have not yet received your investment in the game, you will be deducted 10% when withdrawing money from the game. If you have doubled your investment, there will be a 20% deduction when shooting. Most importantly, if you double your investment, you can now receive 1% of the rewards from battles. If you want to continue the game with your old earnings, you must invest again. For this, we can buy AHT coin chests, Commander chests. Every transaction we make here will be considered as an ‘investment’ and you will be able to continue to earn until you receive 2 times that amount. In the image below, you can examine the rates of withdrawal deductions according to the amount you get back your investment. 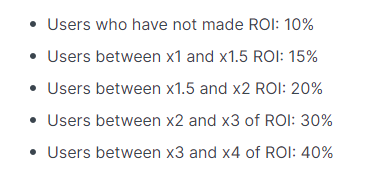 While Age of Holders offers us a fun strategy game experience, it also strives to ensure the longevity of the game with the different economic strategies it applies. Don’t forget to join our Discord servers to enter the fun world of Age of Holders.

Road to Dreams is a set collection type play to

Swamp Soldiers is an old-school style MMORPG play to earn

Spider Tanks play to earn game is a pvp brawler

Today, there are games of different genres that will appeal